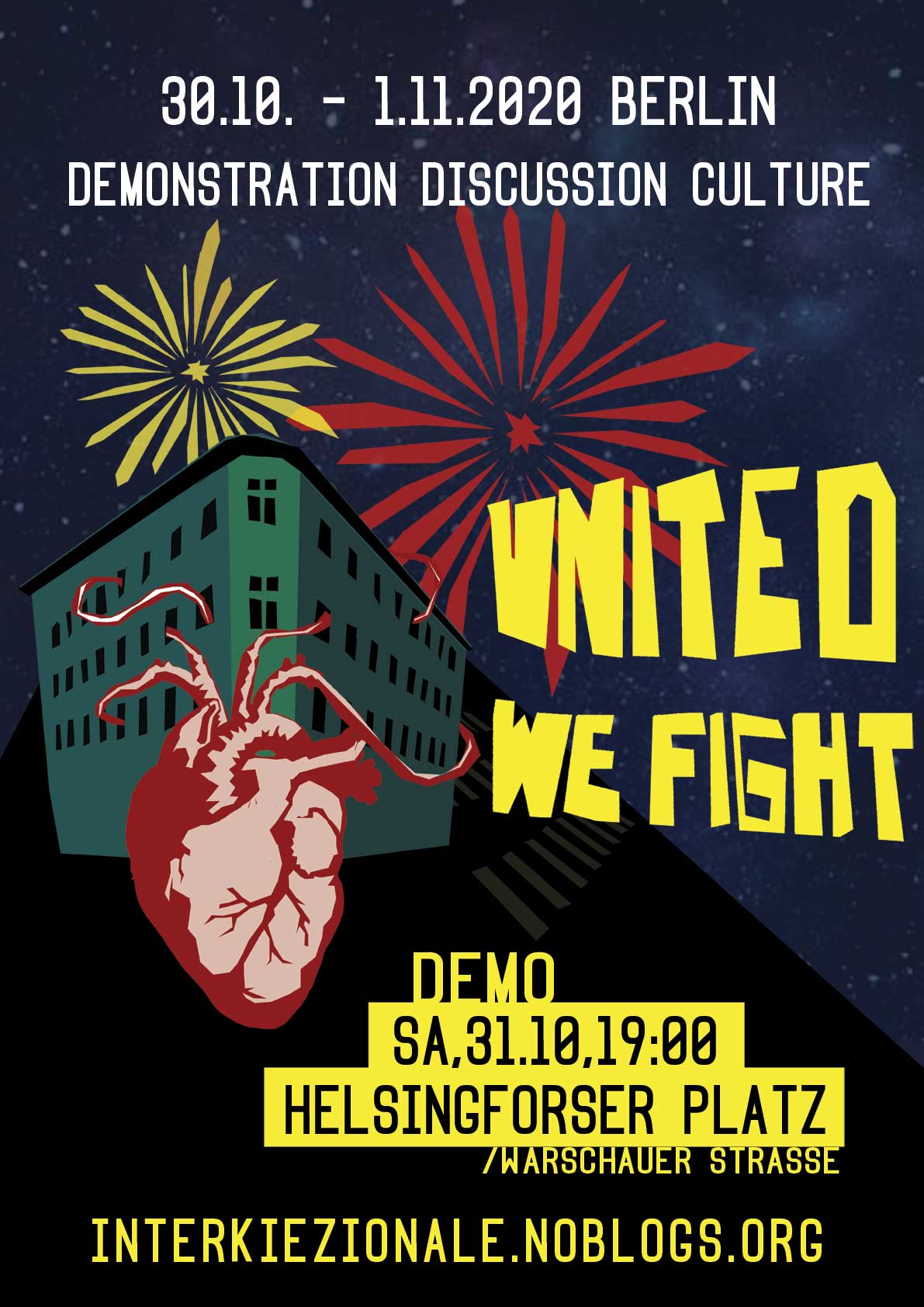 In the last few years we have seen how Berlin is changing through the process of gentrification that expels us from our neighborhoods, through evictions (5.000 per year), rent increases, making life unbearable and increasing policing of public spaces. In the end, gentrification changes the social geography of the city. Furthermore, the Berlin Government sells the city as „alternative“, while simultaneously evicting us from our politicized spaces of interaction, coordination, creation and subversive lifestyle. The city is being sold to capital; used as a touristic attraction available only to those privileged enough to pay very high prices for chic newly built or renovated spaces, with construction companies and speculators profiting, the practice repeated by real estate agencies and endorsed by the institutions of state and governance. In order to achieve this the cops do not hesitate to use violence for the benefit of large investors, such as Vonovia SE, ADO Properties SA, Deutsche Wohnen, Pears Global etc. The establishment of red zones, militarized security tactics and surveillance are the means used to prevent us from moving freely in our neighborhoods.

Approaching this in an intersectional manner, the relationship between different forms of domination, such as racism, heterosexism and capitalism, affects us in a distinct way…(keep reading)

Over the last years we experience a global resurgence of reactionary politics. State and capital, in a constant process of intensifying exploitation and expanding repression, used the global capitalist crisis, which started a decade ago, as a chance to further restructure relations of power in their advantage. Their political answer is materialized in a shift to the right, with a political alliance of neoliberal economic policies coupled with strong nationalistic narratives and repressive policies against resistance and progressive movements. The new face of authoritarianism has unleashed an all out attack against individuals it considers unnecessary or those that choose to resist and collectivize against the ruin of their lives. In our current period, states the world over used measures against Covid-19 to extend repression, policing and surveillance against societies. At the same time, the failings of neoliberal healthcare systems have led to masses of deaths and increasing inequality due to access to healthcare.

To all of this, people in different areas of the world answer with massive resistance on the streets. Movements with different perspectives have revolted, for example in Argentina, Bolivia, Chile, or more recently in France and the USA. The common thread of all these movements is their distance from institutionalized and systemic politics and the choice of self-organization and horizontalism in the fight against authority.

The movement in Germany is fighting against exploitation and oppression in the heart of the beast. Since the movement reached a climax of mobilization against Hamburg’s G20 summit in 2017, the German state intensified and broadened its repressive arsenal with the goal to suppress and isolate the movement: this has seen the biggest public manhunt since the state repression since the 1960s and 70s, widening of police measures such as preventative arrests and extrajudicial surveillance, increased penalties for crimes against police and the ban of the popular German indymedia website “linksunten”.

In the city of Berlin over the past years the movement has come under constant attack through the eviction of its infrastructure, with gentrification manifesting itself in an attack on marginalized and struggling parts of society: rising rents making life unbearable, more than 5.000 forced evictions of houses per year, increased policing of public spaces and an overall changing social geography in the city. On the one hand  this destroys or displaces spaces that the movement uses to support itself. Through heavy policing and state repression, subversive lifestyles and political organization is made impossible within public spaces. On the other hand capital is given space to invest and increase profitability through real-estate, privatization of security through cameras, fences and walls, smart city developments and big public-private partnership projects.

The struggle of self-organized spaces in Berlin has developed against this background. The eviction of the bar collective Syndikat last August, and the broad mobilization of the movement against the eviction, was only the start of the upcoming fight for our infrastructures. The anarcha-queer-feminist house project Liebig34, Køpi Wagenplatz, the autonomous youth center Potse and the bar collective Meuterei are threatened by imminent evictions. The house project Rigaer94 was again raided in July, in an attempt to use the background of the raid several vain attempts to evict squatted flats were made without any success, since all flats could be held by the people inside or taken back. This phase of evictions might become the biggest attack on the autonomous infrastructure in Berlin since the 1990s.

These collective spaces have chosen to stay and fight back in different ways. Their struggle has rallied the movement German-wide as a fight we are all a part of: against private property and capital, against the displacement of people from their houses, against gentrification of our neighborhoods, against a patriarchal and racist system which marginalizes, silences and oppresses the voices of those being exploited or deemed expendable for the system. Against this the projects put forward self-organization and solidarity, defiance of property and confrontation with the state and a direct attack on the oppressive social structures of hetero-patriarchy, nationalism and individualism.

We are traversing a critical period, both for society and for radical movements worldwide.  Under the dogma of “law and order”, state and capital are intensifying their attack on society and trying to further their dominance of all aspects of everyday life, stopping every collective vision and claim, and every perspective of resistance and struggle.
The European capitalist rules, through evictions and police operations, are trying to get rid of all the rebellious neighborhoods in the metropolitan fields. The examples are numerous. From Italy and the eviction of squat Asilo in Turin, in February of 2019, to Greece and the referendum, the evictions of various squats and the police presence in the neighborhood of Exarchia, the constant attack to every movement that chooses to resist is constantly being intensified.

Recognizing Berlin as the capital of one of the most dominant capitalist countries worldwide, we aim to intensify the social struggle in the heart of the beast. Giving a strong answer and creating perspectives against one of the most unbearable states of the world, that consists a model for many countries worldwide and which through its bureaucracy and structures infiltrates all the aspects of our lives leaving no space for self organization and anti-institutional struggles, will create a legacy not only for the local movement but for every rebellious cell worldwide.

By the end of October an official eviction date of Liebig34 may be public. We will get together to prevent this. And if it has already been evicted in the weeks prior, we will take it back!We need all the force we can and call for support to defend our projects. Borderless solidarity is one of our strongest weapons. We want to use this opportunity to make the anarchist perspective more visible and bring the discussion about our ideas, praxis and strategies forward. The days prior to the demonstration on 31.10. will offer space for a plenary assembly, exchange, discussions and ways of actions on our common goals, strategies, occupying ground and collective defense.We consider this demonstration as an opportunity to come together to create a breach in their plans and multiple moments of ragefull, dynamic and militant experiences in which we abandon the defensive role and instead take the street as an active and offensive movement.Thus we hope to make these days part of a continuous discourse and not yet another unconnected event with no followup.

For these reasons we call for people to take the streets and destroy their plans of evictions. Although our fights in different corners of the worlds take different characteristics as we struggle in different contexts, borderless solidarity and the bridging of our struggles has been possible in the past, and is necessary for the future. Let’s choose confrontation and resistance, and seek them in collective moments beyond borders; let’s make their plans a disaster.

We join the Call of Terra Incognita to turn this year’s October into a month dedicated to solidarity and standing up for every occupied ground threatened by repression.

Lets bring our rage together!