It is happening. The next eviction is coming up, this time the anarcha-queer feminist house project Liebig34 is to be evicted. It is probably the largest state attack in decades on the queer feminist resistance in the Germanyy. A first success for us is, that the cops want to be more than 2500 forces strong to evict Liebig34. Water cannons, special forces, climbing troops and a lot of support from other federal states are in demand and it is certainly the most expensive eviction of the decade for the state.
As Interkiezionale we want to go out on the street with you on the evening after the eviction, on day X: for Liebig34, for queer feminism and for another city.

The demo will be registered this time. Starting point is the Monbijoupark. Enclosed you will find some helpful information to prepare you. Our evaluation of the demo could help you to think about how to prepare for the demo, what to consider and how we can manage to come together on the street in an expressive and powerful way.

Action map with the preliminary route: 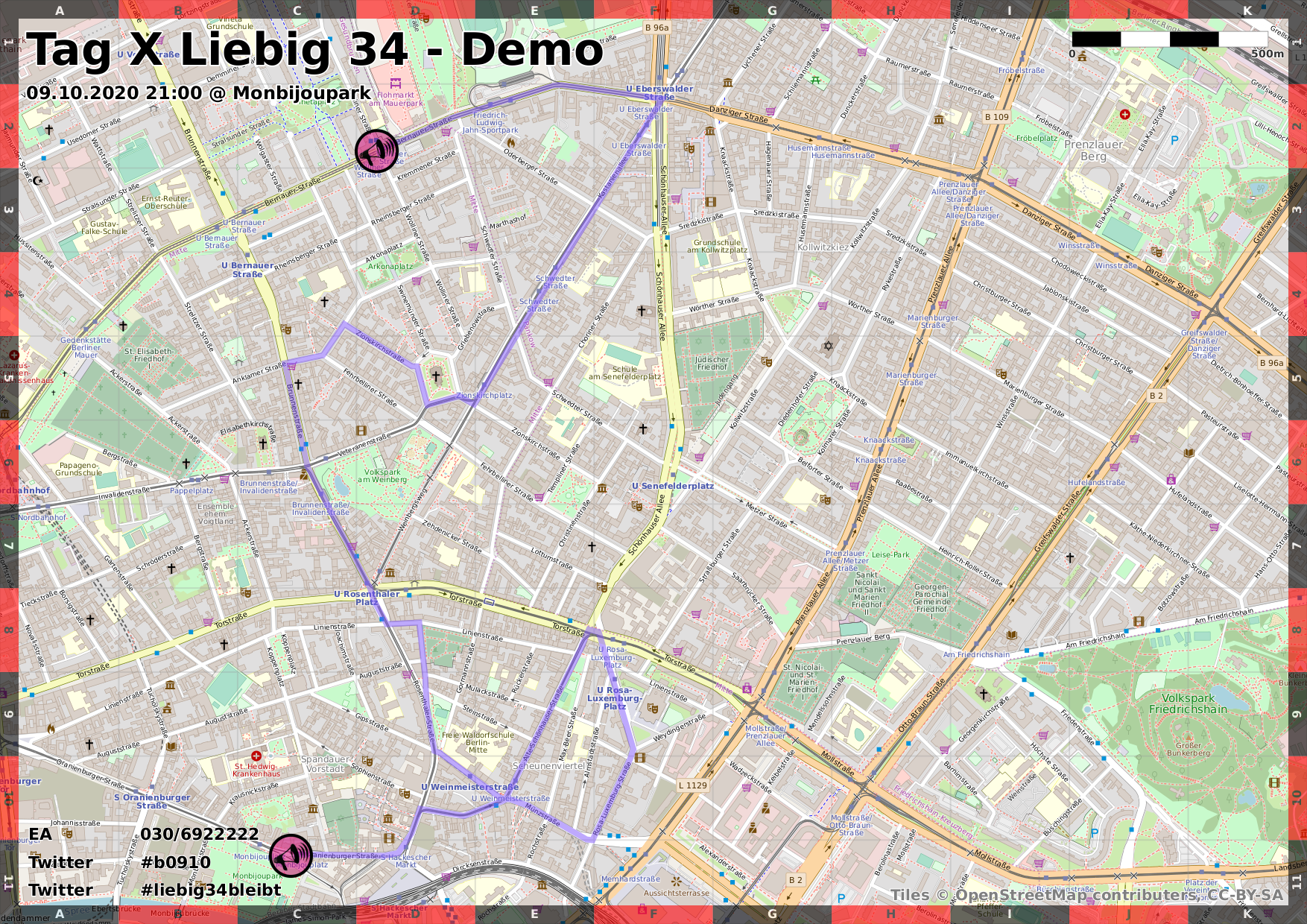 If you have demo cell phones or for before the demo you can get the latest information via the following channels:
Action ticker: aktionsticker.org
Follows on Twitter: #b0910 #love34remains
Web: interkiezionale.noblogs.org or liebig34.blogsport.de
EA/ Legal Team: +49 30 6922222

Known tactics of the Berlin cops on demos:
The Berlin cops have a tactic of counterinsurgency that has been developing for decades, some of which is specific to Berlin. The following information is based on experiences from past and is not foreknowledge of the cops’ actions on that day.
A common procedure in demos is to first control the starting point, so that people can hardly get to the starting point of the demo without control. Also, but less frequently, the cops in the immediate vicinity check the access roads as well as the nearby subway stations.
Often the cops try to control demos by walking close to the demo or even in the rows right next to the demo train. One extreme is the Wanderkessel, where the demo is closely accompanied by cops from all sides. Here there are some behaviors that make it harder for the cops to surround the demo, such as trying to take the whole side of the street.
The Berlin cops film a lot, and focus with the camera on details such as shoes or other features of clothing (trademarks, colorful seams, patches, etc). In addition to securing “evidence”, the aim is to identify alleged perpetrators at a later date, since arrests often do not take place until then. The cops often wait until after the official dissolution of the demonstration or even arrest people nearby hours later. Screens, banners or other items and appropriate clothing make it more difficult for the cops to film or recognize people.

How can you prepare for the demo:
Wear masks & gloves to protect yourself and others. Familiarize yourself with the route and surroundings. Think about how you can get involved in the demo together with your buddies, friends and/or in the reference group to take the initiative. Pay attention to the people around you and to announcements and loudspeaker announcements. If you see any arrests, report them to the EA/Legal Team: +49 30 6922222
Here is a link to the reference group reader for reference groups who want to prepare themselves more intensively.

What should you leave at home: private cell phone, narcotics, objects that could be used as weapons (nail scissors or similar), dogs, bicycles, small children
What should you bring: a nose-mouth guard, gloves
What else is practical: printed out action card, your own banners, umbrella, rain jacket or change of clothes, sunglasses or privacy protection

Anti-repression:
the legal team can be reached during the demo. If you observe any arrests please report them to the EA. If you are arrested yourself and your arrest has been reported, please log out as soon as you have been released from the GeSa (prisoner collection center). Show solidarity with arrested persons. The number of the EA is +49 30 6922222
There will be prisoner support. Check out the action sticker, Twitter or local infopoints to support them or to find out which Gesa people will be brought to.

Nobody should be left alone with repression, so get in touch with us to get support. Additionally, this flyer by the red aid can give tips and support in case of repression in the form of legal procedures and letters by the cops. Also, the red aid [Rote Hilfe e.V.] offers support in their local branches [website in German].

In case of experiences of cop violence this broschure can give you some first emotional aid. It is absolutely normal after experiencing violence to feel very emotionally upset, sad or even depressive. In extreme cases of violence, it makes sens to seek psychological help. Maybe your local GP can give you some first advice on this. Also the reading list of OutOfAction gives some advice [German only].