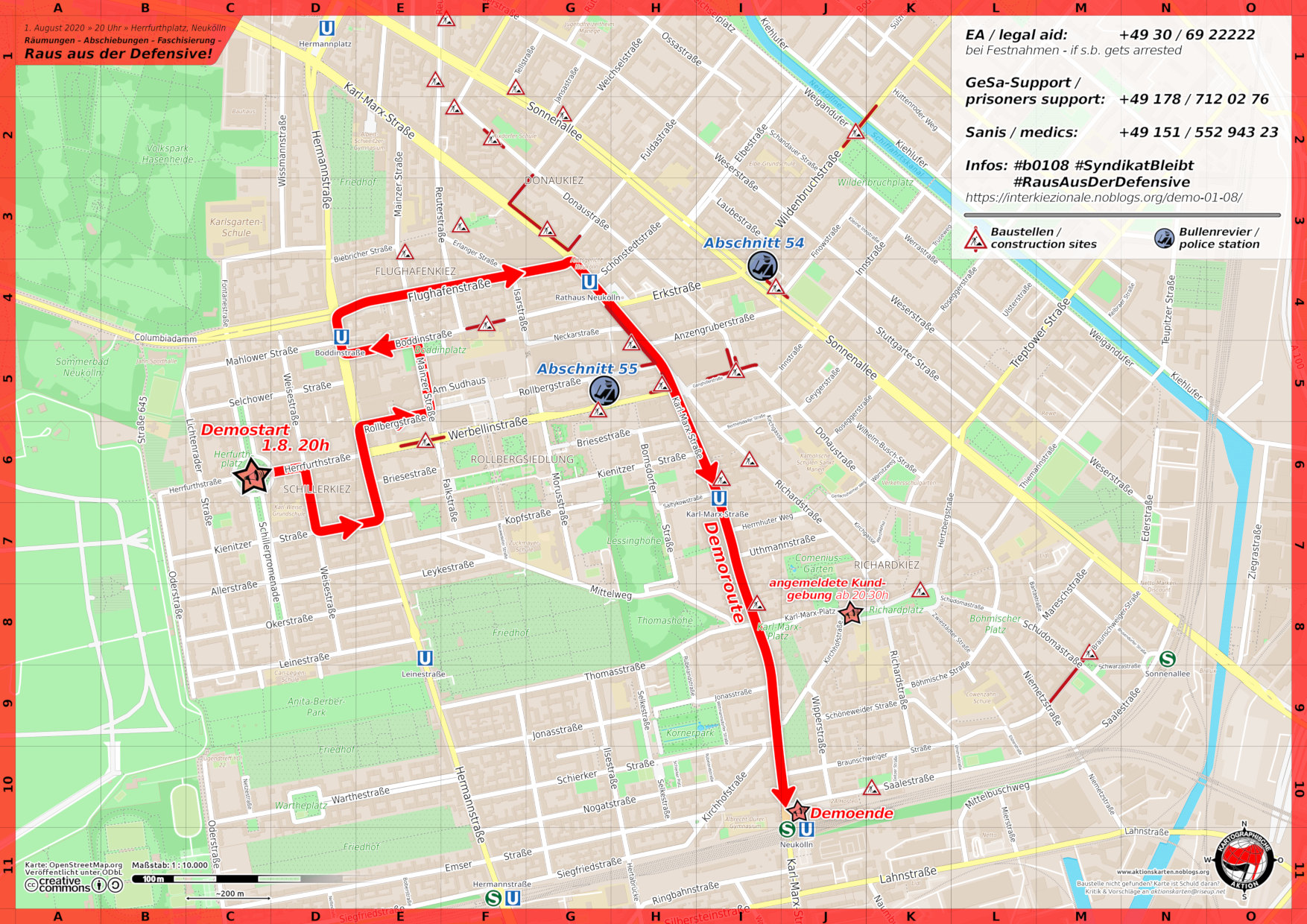 Location of the demo
The demo is taking place in Berlin-Neukölln. North Neukölln has long been a district for people with lower incomes and precarious living situations, as well as people with a migration background. Until a few years ago, the district was mostly home to apartment buildings in which the ground floor kisosk, was occuppied by kiosks, shisha bars, bakeries, snack bars and small businesses. However, the district has been increasingly gentrified for some time now. Since then, more and more expensive cafés and shops as well as people with higher income have displaced previous shops and renters. More an more, shops or larger corporations become visible in the squares and main streets of Neukölln. Especially in the last few years the state has contributed by working towards gentrification and displacement. Large construction projects, regular raids against migrant small businesses and cops who criminalize and expel people on the street play a central role in the displacement taking place in Neukölln. The district is also home to Syndikat, the bar threatened by eviction.

Protest of Conspiracy ideologues/ Nazi and counterprotests on the weekend:
For the 01.08. “Querdenken 711” and the “Kommunikationsstelle Demokratischer Widerstand”, and organized Neonazi structures mobilize nationwide for a “Day of Freedom” and the “End of Corona” into the Berlin government quarter. The groups originating from the so-called ‘Corona protests’ are a diffuse spectrum of conspiracy ideologues, Reichsbürger and organized Nazis.
The protests and demos are spatially concentrated in the Berlin government district and Mauerpark (northern city center) and therefore take place at a distance from our demo. Important information about the right-wing protests will be distributed through our channels during the day.
Already on Friday there will be a demonstration against the “Kommunikationsstelle Demokratischer Widerstand” in Berlin-Wedding. More information about this demo via Antifa Nordost: Friday, 31.07. 18h S-Bhf Wedding
On Saturday, counterprotests by ‘Berlin gegen Nazis’ are planned from 12 noon on. Information about this on web of Berlin gegen Nazis.

Known tactics of the Berlin cops:
The Berlin cops have a decade-old counterinsurgency tactic, some of which is specific to Berlin. The following representations are based on experiences from the past and are no foreknowledge of the cops’ strategy on that day.
A common procedure for autonomous demonstrations is to encircle the starting point of the demonstration and control and search people wanting to get to the starting point. Also, but less frequently, the cops control the nearby roads and subway stations. It is unusual for the cops to control the access points to Berlin (central station, Ostkreuz etc).
Often the cops try to control demos by walking close to the demo or in rows right next to the demo. In extreme cases, the cops create a walking cettle, where the demo is closely accompanied by cops from all sides.
The Berlin cops film a lot and focus on details such as shoes or other features of the clothing (trademarks, colorful seams, patches, etc). Apart from securing “evidence”, the aim is to identify alleged perpetrators at a later stage, as arrests often only take place at that point. The cops often wait until after the official dissolution of the demonstration or even arrest people hours later in the streets around the demonstration.

How you can prepare for the demo:
Wear masks & gloves to protect yourself and others. Familiarize yourself with the route and surroundings in advance. Think about how you can get involved in the demo with your buddy, friends and/or your affinity  group in order to take initiative yourself. Pay attention to the people around you and to announcements and loudspeaker announcements. If you observe arrests, report this to the legal team.
For affinity groups who want to prepare more intensively, here is a link to the affinity group reader.
What you should leave at home: private mobile phone, narcotics, objects that could be used as weapons, dogs, bicycles
What you should bring: a mask, gloves
What else is nice to have: printed out action card, banners, umbrella, rain jacket or change of clothes

Sleeping places:
Please send all inquiries and offers as early as possible to: interkiezkissen[at]riseup.net. The sleeping places will then be allocated as follows:

Warm-Up
On Friday will be a live concert and manifestation in front of Syndikat, 4-10pm (Weise- / corner Herrfurthstraße) with music, food and readings. There will also be an Interkiezionale-Infostand with the latest information and tips about the demo. Saturday there will likely be KüFA at one or more threatened projects.

Stay tuned for the latest updates.